Microaggressions in the Workplace: More Powerful Than You Think 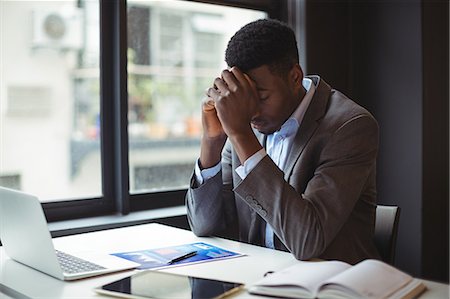 Microaggressions are “brief and commonplace daily verbal, behavioral, or environmental indignities, whether intentional or unintentional, that communicate hostile, derogatory, or negative slights and insults toward members of oppressed groups.” It makes people feel like they don’t belong and can create a hostile, non-inclusive workplace environment. Unlike people who overtly discriminate, people who commit these types of acts might not even know they have insulted someone.

Microassaults are intentional verbal or nonverbal attacks, including name-calling, avoidant behavior, or the use of slurs. Common microassaults include calling victims “colored”, “oriental”, intentionally serving a white customer before a black customer, or displaying a swastika. These happen on the individual(micro) level and those who say them usually show it publicly when they lose control or feel that their environment protects them from the potential consequences.

Microinsults happen when people unintentionally or unconsciously say or do things that discriminate against oppressed groups. They are often subtle; the perpetrator will not understand why the microinsult is harmful, but the victim will see the hidden, demeaning message right away.

Some examples in the workplace:

Microinvalidations are statements that subtly deny, exclude, or undermine the beliefs, feelings, or lived experience of a member of an oppressed group.

Here are some common examples: 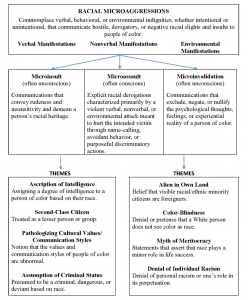 Why are Microaggressions so Powerful?

Microaggressions are powerful due to 4 key characteristics:

For example, a black customer who believes she is being treated poorly will probably find it difficult to prove to a store employee that she is being treated unfairly due to race. If she confronts the employee, they could easily deny her claim, say it was due to something other than race, or tell her she’s being crazy. Furthermore, the store employee may become angry after being called a racist and won’t take responsibility or listen to her concerns.

Invisibility of Unintentional Bias refers to the phenomenon that people don’t realize how prejudiced their behavior is because discrimination is such a deep part of American society.

For example, heterosexual people have been socially conditioned to believe heterosexuality is normative. So they may not realize the privileges they have(like public displays of affection) or will treat everyone they meet as heterosexual which leads to microaggressive interactions.

People of privileged groups, such as men, heterosexuals, or whites, don’t believe microaggressions are harmful. They can even tell people of marginalized groups to “get over it” making it sound like it was not a big deal. However, researchers have shown that microaggressions can result in many serious and negative effects on someone.

4. The Catch-22 of Responding to Microaggressions

If people of marginalized groups decide to call others out on their microaggressions, they risk their own physical and/or mental safety. But if they don’t say anything, the perpetrators will not change their behaviors and will continue to view others in a negative light.

For example, a woman calling male co-workers out on using sexist language could cause backlash, create a hostile workplace environment, and potentially put the woman’s position at the company at risk. Title VII of the Civil Rights Act of 1964 protects people from overt acts of discrimination, but there’s very little legal protection for microaggressions in the workplace. This is problematic because both research and anecdotes tell us that microaggressions are happening all the time in the workplace.

Although microaggressions may sometime seem harmless, those who deal with it every day know the pain it cause. And if you don’t believe victims of microaggressions, scientists have shown that microaggressions can lead to serious health effects. This can include anxiety, depression, low self-esteem, stress, insomnia, helplessness, suicidal thoughts, loss of motivation, reduced cognition, anger, and even changes in eating habits.

Microaggressions can also lead to unhealthy levels of stress hormones in the body for long periods. This in turn leads to many negative health effects. One study was done on this and found that there was a positive correlation between microaggressions and increased anxiety by race-based stress among African-Americans. Another study found a positive correlation between microaggressions and self-reported histories of heart attack, depression, and hospitalization among Native Americans.

Ways an Organization Can Limit Microaggressions in the Workplace

One way you can do this is by celebrating holidays that uplift people of marginalized groups like International Women’s Day, African-American History Month, Pride Month, and International Day of Persons with Disabilities. This will go a long toward increasing inclusion in the workplace.

How To Respond to Microaggressions in the Workplace

Marginalized groups have to deal with microaggressions constantly, and it would take too much emotional effort to respond to every single attack. Instead, victims of microaggressions should weigh the pros and cons of responding to each one and consider their goals: Do you simply want to be heard? Or do you want to educate the perpetrator of the microaggression?

1. If I respond, could my physical safety be in danger?

2. If I respond, will the person become defensive, and will this lead to an argument?

3. If I respond, how will this affect my relationship with this person (e.g. co-worker, boss)

4. If I don’t respond, will I regret not saying something?

5. If I don’t respond, does that convey that I accept the behavior or statement?

Diane Goodman, a social justice and diversity consultant, lists phrases you can use to confront the perpetrator. She especially recommends these three approaches.

These statements are meant to show the perpetrator that the victim is not attacking them. Then hopefully, the perpetrator actually listens and changes their behavior instead of becoming defensive.

What to do if you commit a Microaggression in the Workplace?

If somebody confronts you about your microaggression, listen to them and don’t get defensive. Never deny that someone is hurt or offended by something you said. That is a microaggression on its own, because denying hurt or offense is invalidating their experience.

It is important to understand what the impact of a microaggression can cause on someone, especially in the workplace. In order to keep a healthy work environment, we need to more aware of what we say and how we say it towards others. So, the next time you see someone committing a microaggression or catch yourself committing one too, be upfront with yourself and know how to properly respond to the situation.